Lives and works in Philadelphia, PA

The ubiquity and ambivalence of corporate iconography, the banality of violence and pleasure, the vacancy of identity articulated through narrow registers, and the thrill of transgressive appropriation linger in the compact, demonstrative, and unexpectedly lovely paintings of Exene Karros. Chief among her fixations is a quintessentially American urban experience, one suffused with late capitalist malaise, and remarkably circumspect in the cultivation of a semiotic toolkit. Like a Virgin Mary winking from a piece of moldy Wonder Bread, her pictures chart a strained but rigorous attempt to make meaning from the most vacant forms, identifying joy and pleasure in debasement. Karros' work confounds the current apparatus of representational painting by foregrounding its demonstrative form. Her paintings are tools, and her personal symbology forms the basis for a series of cryptic flow charts on flat gray grounds of gunmetal, cement, putty, Coffee Mate-taupe. Her imagery is immediately iconic and mundane: Abraham Lincoln, Statue of Liberty, The Cross, Dove, Toy Soldiers, Livery Vehicles, Mr. Peanut. Her symbols are rendered with a labored precision that is both humorous, melancholy, and inflected with a desire for a kind of divine encounter, looking to these things as idols, as tokens of some sign of a future. The biggest thing lurking in Karros' blunt and punchy paintings is ultimately, surprisingly, hope. 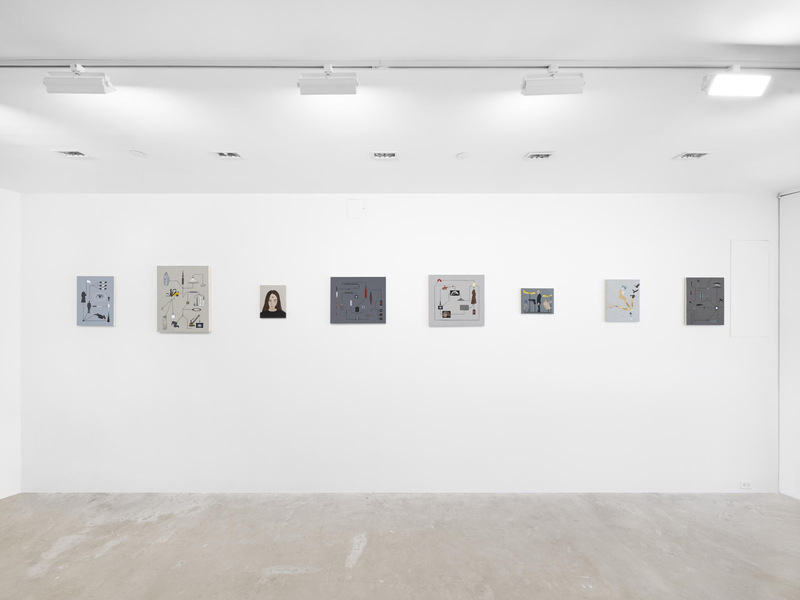 God strike me down or at least pay attention